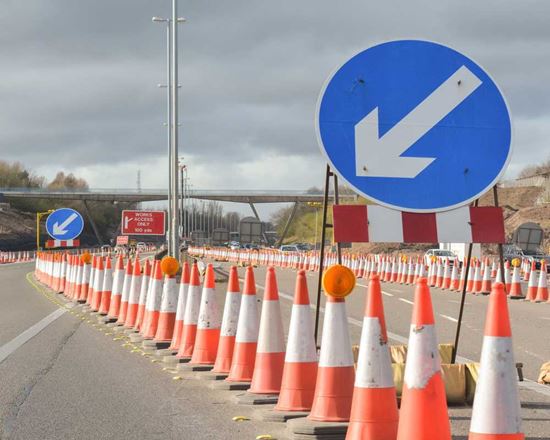 The Government has announced it’s looking into the prospect of increasing the speed limit near roadworks on England’s motorways in a bid to reduce congestion on our busy roadways. Highways England have been asked by the Department of Transport to investigate whether or not this can be done safely and the current maximum of 50mph can be increased.

Highways England have approached the task by trialing a 60mph speed limit on a four mile stint of roadworks on the M1 motorway and if it proves to be a success then this could see the roll out country wide. Another method which has been suggested to help reduce congestion induced by roadworks is for the stretches of roadworks to not exceed more than ten miles at a time as well as increasing the number of lanes which remain open when roadworks are underway.

So what’s caused the Government to take a focus on this? Well, the DfT’s latest transport predictions estimate up to a 55% rise in traffic figures by 2040 and over the coming years there will be much more roadworks underway as Highways England works towards converting over 4,000 miles of England’s motorway network to be ‘smart’ motorways; smart motorways allow for the hard shoulder to be used as an additional lane during busier parts of the day and they can also enable variable speed limits to help control congestion.

It is of course important to consider safety, there are currently areas of motorway such as the M3 from the M25 heading towards Basingstoke then you have a 50mph limit for 25 miles of roadworks which can make it difficult for drivers to remain focused and the reduction of the length of these would help make the roads safer.

What are your thoughts? Do you think shorter stretches of roadworks with an increased speed limit will work safely on our Motorways?

Any cookies that may not be particularly necessary for the website to function and is used specifically to collect user personal data via analytics, ads, other embedded contents are termed as non-necessary cookies. It is mandatory to gain your consent to enable these cookies and store them on your browser.

Coronavirus (COVID-19) Due to Covid19 the following changes have been made to our Business trading to safe guard our customers and staff. We are now available for online enquiries and click and collect. Meet and interact with one of our sales staff on Zoom Video, ask questions, view the cars live in the comfort of your own home. Viewing available at home, should you live within a 30-mile radius, this will be done by appointment only. No test drives are available due to the 2-meter rule imposed by the Government this also safe guards you as a customer and our sales staff from contracting Coronavirus. With this in mind we have implemented a 48hr return policy should you be unhappy with the drive. Free delivery after purchase within a 30-mile radius. For Nationwide delivery then please ask for a quote. For service customers we have an out of hours drop off and collection service to avoid peak times during the day. Your car will also be sanitised before and after the work has been carried out including a wash. Highfield Motors Ltd cannot be held responsible for the infection or spread of Covid19 or any similar illnesses but we are doing all we can to prevent the spread. When Visiting we request you take Government Guides to protect yourself.
IMPORTANT UPDATE