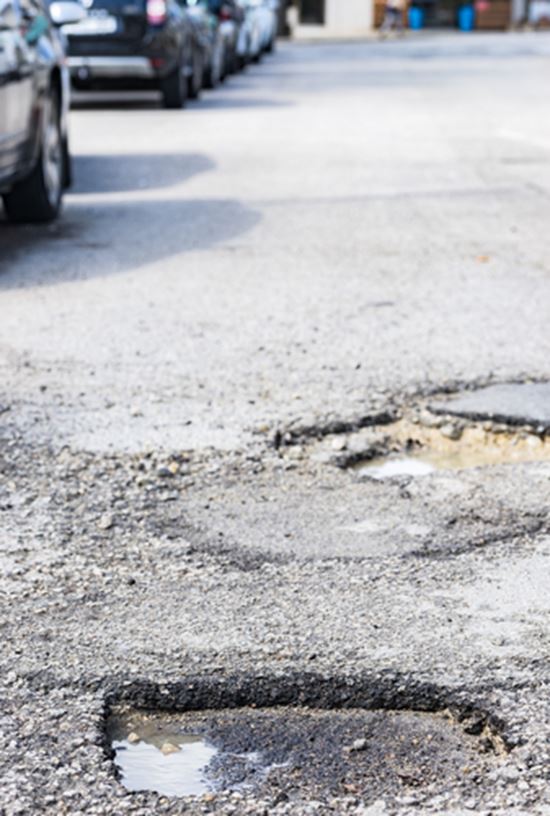 Potholes have featured in the news quite a lot recently, and they are causing more problems than ever before. The final three months of 2016 saw vehicle failures caused by potholes up 24% compared to the same three months in 2015. It has also been predicted that the UK will see an unprecedented rise in the number of potholes throughout 2017.

Most potholes are formed during bad weather conditions, heavy rain freezes into cracks in the road and expands causing a pothole to form. However, even though rainfall is lower than it would normally for this time of year the number of potholes is still on the rise, it’s thought that the long term lack of funding and maintenance of roads is ultimately to blame.

The longer a pothole is left the worse and the bigger it comes, which is when it can cause damage to your vehicle. The most common damage done to cars is to the suspension, shock absorbers and wheel alignment, the cost to drivers being anything upwards of £350 to get repaired. The AA undertook a survey in 2016 and revealed that 39% of their members had cars damaged by potholes. In 2016 an estimated £120 million was spent on repairing potholes across the UK, with the government promising another £250 million to get road conditions up to standard. The cost for each pothole repair sits around £53, however this doesn’t include the money paid out as compensation for damaged vehicles.

What to do if your car is damaged by a pothole

If your car has been damaged by a pothole then you are eligible to make a claim for compensation, because the local authority hasn’t kept the road up to a good standard. Visit your local council to find out who is responsible for the road where the offending pothole is located and speak to them about the steps that need to be taken to claim compensation for the damage. If safe to do so it is a good idea to get photos and measurements of the pothole that caused the damage, this helps build your case to claim for compensation.

Any cookies that may not be particularly necessary for the website to function and is used specifically to collect user personal data via analytics, ads, other embedded contents are termed as non-necessary cookies. It is mandatory to gain your consent to enable these cookies and store them on your browser.

Coronavirus (COVID-19) Due to Covid19 the following changes have been made to our Business trading to safe guard our customers and staff. We are now available for online enquiries and click and collect. Meet and interact with one of our sales staff on Zoom Video, ask questions, view the cars live in the comfort of your own home. Viewing available at home, should you live within a 30-mile radius, this will be done by appointment only. No test drives are available due to the 2-meter rule imposed by the Government this also safe guards you as a customer and our sales staff from contracting Coronavirus. With this in mind we have implemented a 48hr return policy should you be unhappy with the drive. Free delivery after purchase within a 30-mile radius. For Nationwide delivery then please ask for a quote. For service customers we have an out of hours drop off and collection service to avoid peak times during the day. Your car will also be sanitised before and after the work has been carried out including a wash. Highfield Motors Ltd cannot be held responsible for the infection or spread of Covid19 or any similar illnesses but we are doing all we can to prevent the spread. When Visiting we request you take Government Guides to protect yourself.
IMPORTANT UPDATE